Approximately one billion people in the world do not have legal rights to the land they need to survive. Women in rural areas are particularly at risk of insecure land rights because of gender-based discrimination and prevailing social norms. Landesa, a nonprofit organization, works with governments, civil society organizations and partners to help families in rural areas obtain legal rights to their land and break the cycle of poverty that runs through generations.

JK: What is it about Landesa’s mission and work that made you join the organization?

MMC: All around the world, the land is an essential ingredient to meeting basic human needs, such as shelter, food and livelihoods. Land can also be a significant factor in determining someone’s social standing, power and voice, particularly within households, communities, and in society. For all these reasons, land is really important for achieving a whole range of development and human rights objectives, because it has a ripple effect on household nutrition and food security, access to health services and education. It can provide greater stability for families, and a reduction in land-related conflicts can promote greater stability and peaceful society. So, it has these interesting connections and effects on a whole range of issues.

What are the biggest challenges or issues that Landesa is trying to tackle?

Let me set the scene in terms of the scale of land rights issues.

About a billion people living in rural areas do not have secure land rights. So this is approximately 1/7 of the world’s population at this point. Without secure and stable land rights, people face a number of challenges. For example, farmers might be unable or unwilling to make long-term investments in their land that could potentially increase productivity, because they feel they could lose their land before the investment would pay off.

Another challenge: without proof of ownership, they may be unable to qualify for finance or credits, or even some government programs and NGO resources. In extreme cases, they may face the possibility of eviction. So, for instance, large scale land-based investment projects may come in, and if the farmers’ rights are not documented and recognized, they could be evicted from their land.

How is Landesa trying to respond to those issues?

We work with governments, civil society and corporate partners to understand the ways in which rural women and men encounter barriers to their land rights, and then develop new laws, policies, and programming that overcome those barriers. By working at a policy level, we are able to support legal changes that can strengthen land rights for millions of people. And then, we try to uncover and address gaps in the implementation of those protective laws.

What is the situation of women in the context of land rights?

Women in rural areas often face extra layers of gender and age-based discrimination that both contribute to and are compounded by insecure land rights. One example of this is that they may not be perceived as leaders within their communities, so they are being left out of the community level bodies that handle land-related decision making. And that’s actually true at the household level, at the community level, at the national level, at all levels. They may not have a seat at the table where the decisions are being made about land.

Could you elaborate, what does ascertaining land rights mean, and why is it so important to give these rights to women?

Today women can encounter both legal and customary barriers to their land and inheritance rights. And there is research out there that shows that this is true in more than half of the countries of the world. And the problem is two-fold. One is that there can be conflicting legal provisions, that on the one hand, mandate equality of land rights between men and women, but then in other areas of the law, they may undermine that equity when it comes to matters of inheritance or divorce or separation. So, you may have different areas of the law that don’t mesh well with one another, and that can leave women vulnerable, particularly when their marital status changes.

Even when you do have really good coherence in the legal framework, those laws are not always implemented effectively. That can be due to a lack of awareness, weak governance or institutions, lack of access to legal or judicial services, or really just prevailing norms that go against women’s ability to own land.

So what could be done to help women assert land rights?

First of all, women need to understand what rights the law provides for them. Then, they need to have the ability to claim those rights with authorities – so the authorities have to have this awareness as well. And then, the women cannot have a fear of repercussions or social stigma, or assumption that they need to have that process mediated by a male relative.

For example, in some rural places in Africa, social norms say that women can only approach local authorities in the presence of a male relative. If they are in conflict, or they are at risk of losing land to a male relative, it can be tough for women to even access the government body at a local level who could protect their rights.

These are critical issues for women in rural areas for many reasons: in many societies, women relocate at marriage and they move from the village of their birth into the husband’s community. As a result, they might be perceived as outsiders in their husband’s community, and that can leave them vulnerable when their marital status changes, particularly if there is a divorce or if their husband dies. In those cases, women might lose the land even if they do have rights to it under the law. 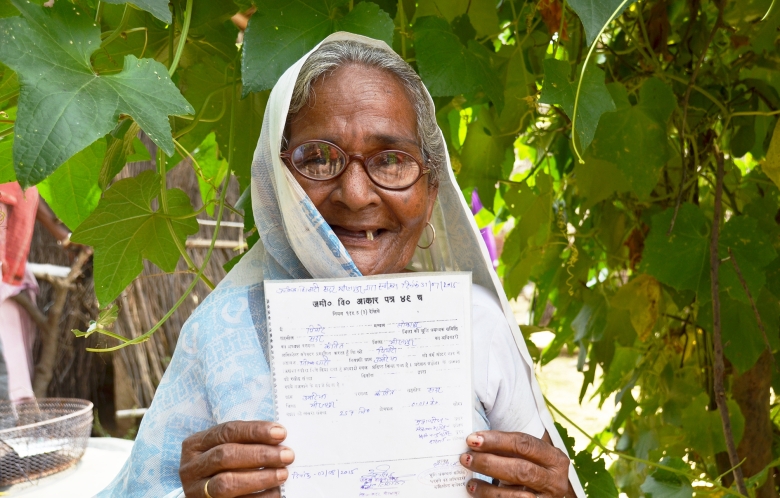 You work with different governments. I imagine some of them are not as progressive as you are, and might not be eager to accept your solutions or proposals.

We only work at the invitation of governments that we have signals are willing partners. So, we don’t enter into a country when we don’t perceive that there is a real political will to carry forward legal reforms.

We are partnering with civil society as well so that we are ensuring that there is good fertile ground for cooperation between the government and civil society, and I will say it can be a very tricky balance to strike sometimes. One specific example is Liberia, where we have been working with civil society and with the government on land law legislation that had been stuck in the parliamentary process for about four years. So, there was a very progressive policy document that was written, which went through several revisions in the parliamentary process. Civil society had many issues with the revisions and they were split about how to address those. We were able to step into that in conjunction with the group of civil society organizations and say: “Ok, let’s look at ensuring that the protections that are really important for communities get back in, and then really push for passage of the legislation.” And that happened in 2018. So, there was a long process. Still, with civil society and the land authority working directly with the parliament, we made sure that all the key protections went back into that piece of legislation and that it finally passed and was signed into law.

Have you ever experienced any negative responses or negative reactions to your actions from a community you worked in?

Yes, sure. One example that comes to mind is an ultimately successful project that we ran in Kenya, called “The Justice Project.” The project came on the heels of a new constitution in Kenya that was passed in 2010, that gave women land rights for the first time. We were working in a particular community that was predominantly Maasai, which is viewed as a very traditional and, some may say, very patriarchal society. We went into the community and started with land rights education and legal awareness training around the constitution and what that meant.

And in initial community entry meetings, we heard very strongly from elders, that essentially women are property and  property cannot own property.

Over time that has changed. After about two years of working in that particular community, there were by-laws in the community that recognized women’s participation in the local governing body. Women elected for the first time to community-level land bodies and dispute resolution bodies. That had not happened in that community ever up to that point, and it was rare throughout Kenya communities. But the starting point was not very encouraging, to be honest.

You work primarily with governments and NGOs. Do you cooperate with corporate partners, as well?

Yes. In more recent years, we also have partnered with corporations to help them comply with global standards around land protection in investments that they are making. There is a whole set of voluntary standards for investments, and many corporations are interested in trying to figure out how to comply.

Is there anything that we, as average citizens, can do to participate in your mission?

Yes, absolutely. There are a number of ways people can get involved. As I mentioned before, in more than half of the countries in the world, women can encounter barriers in their land or inheritance rights in law or practice. So, one thing that people can do is to learn a little bit about the laws and practices in their own countries and what guaranties the law provides for gender equality around land rights.

And if people find they live in a place where the laws or practices are not equitable, there are steps that they can take to begin to build awareness around this challenge. They can talk to their neighbors, family and friends about why women’s land rights matter; they can write to the government or find other avenues for advocacy with the government to change the laws and make them more progressive and equitable around women’s land rights. And they can support local organizations that are dedicated to strengthening women’s land rights and women’s rights in general.

There might not be an organization in a particular country that is focused specifically on women’s land rights. Still, a lot of women-centered organizations are dealing with land rights issues, particularly if they are providing legal assistance to women. The land issues, after all, are often a large share of the legal caseload for paralegals and other assistants in developing countries.

What is the source of the greatest satisfaction in your work?

I feel very strongly that the best solutions to problems come from the people who are closest to those problems. So, what gives me the greatest satisfaction in my job is that I have the privilege of facilitating smart, passionate advocates, who are working around the world and are committed to leveling the playing field and increasing opportunities so that everyone can thrive. I view my role within Landesa as a facilitative role, allowing resources and support to go to the people who are crafting the solutions that will address the problems they face.

All photos provided by Landesa